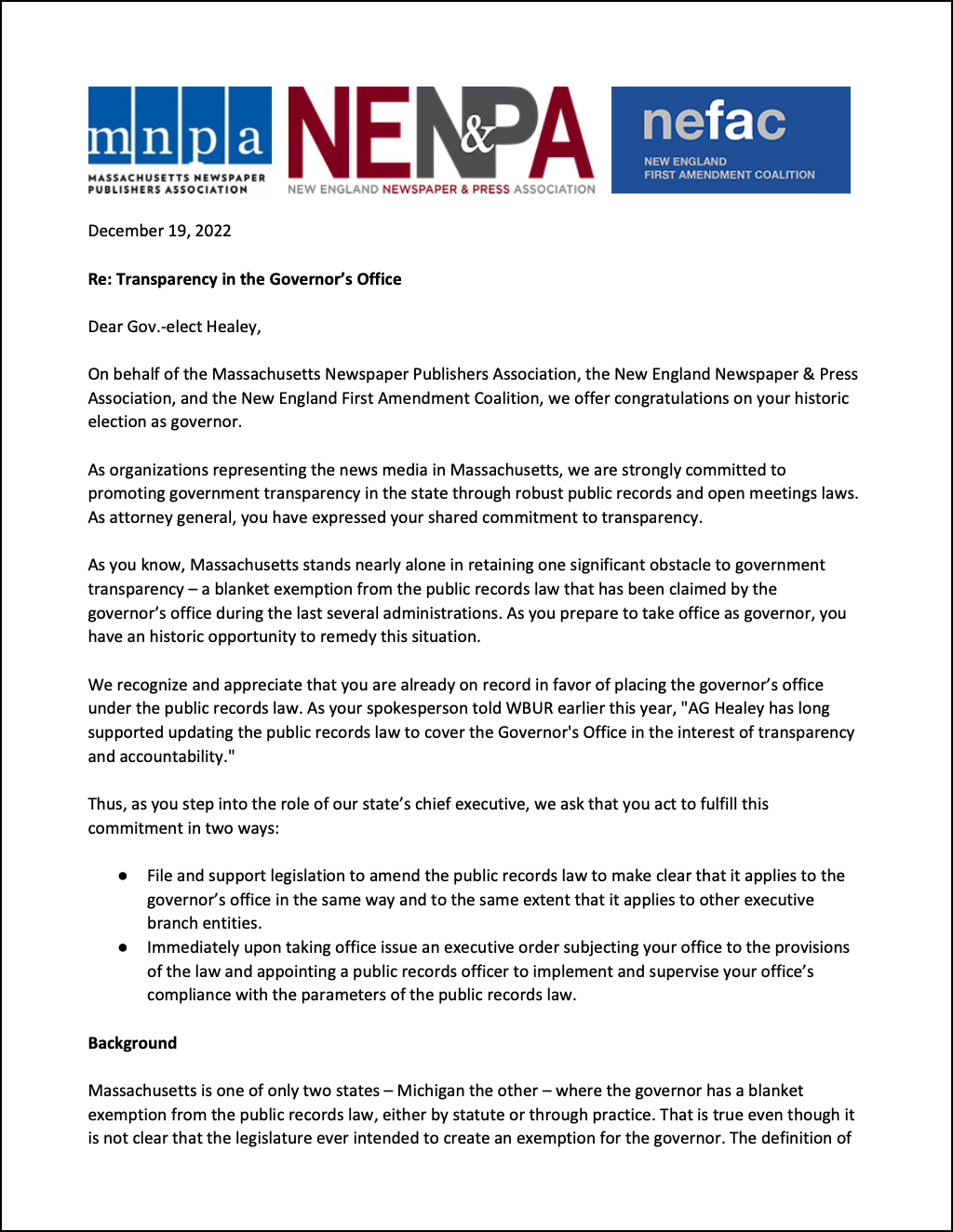 NEFAC, the Massachusetts Publisher’s Association and the New England Newspaper & Press Association wrote in a Dec. 19 letter to Healey that:

“As a matter of public policy, there is no reason to give the governor’s office a blanket exemption from the law. No doubt, there are certain documents within the governor’s office that should be excluded from public view. But the existing exemptions to the public records law — such as those related to policy development and personal privacy — fully cover these situations and protect the governor’s office to the same extent that they protect any other state or local official performing an executive function.”

Massachusetts is one of only two states — Michigan the other — where the governor has a blanket exemption from the public records law, either by statute or through practice. That is true even though it is not clear that the Massachusetts legislature ever intended to create an exemption for the governor.

Confusion over the governor’s coverage under the law followed the Supreme Judicial Court’s decision, Lambert v. Judicial Nominating Council, 425 Mass. 406 (1997). Every governor since Lambert, starting with Paul Cellucci, has invoked it as a blanket exemption from the public records law.

But Lambert dealt only with a very specific issue: whether the public should have access to questionnaires completed by applicants for judicial appointments and submitted to the Judicial Nominating Council.

NEFAC, MNPA and NENPA asked in their letter that Healey do the following to address the confusion and restore transparency to the governor’s office:

(2) Immediately upon taking office issue an executive order subjecting your office to the provisions of the law and appointing a public records officer to implement and supervise your office’s compliance with the parameters of the public records law.

“You have the singular opportunity to reverse 25 years of an ill-conceived policy that has allowed the governor’s office to operate under a level of secrecy that is unimaginable in 48 of 50 U.S. states,” the groups wrote to Healey. “We respectfully ask that you act in your first days in office to remedy this wrong through an executive order and then seek to permanently memorialize the change through legislation.”

NEFAC is the region’s leading advocate for the First Amendment and the public’s right to know about government. All coalition briefs, advocacy letters and statements can be found here.