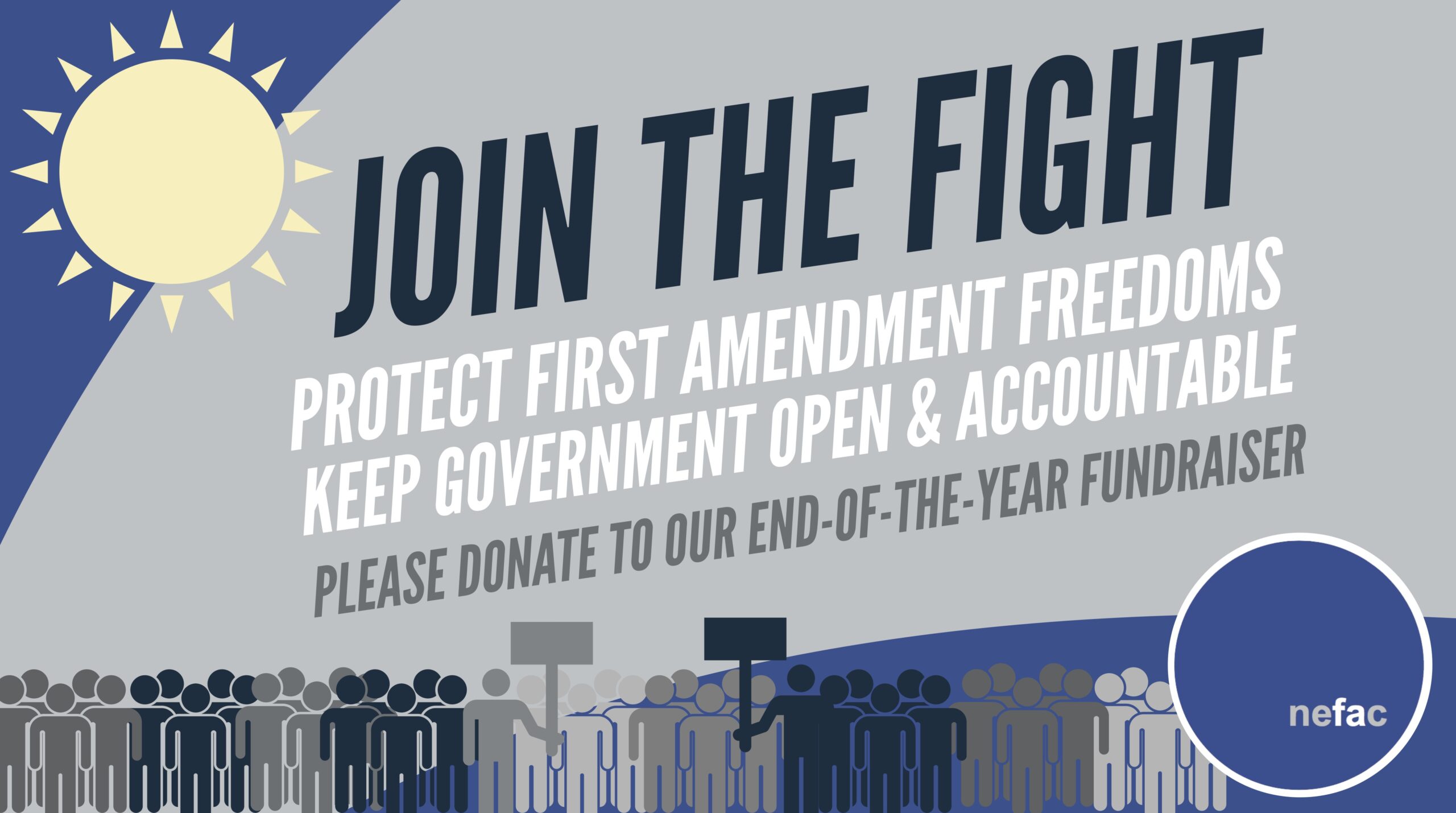 Teaching the World About First Amendment Rights | NEFAC President Gregory V. Sullivan recently met with a group of Iraqi diplomats to discuss the First Amendment and freedom of information laws in the United States. Sullivan (pictured with Iraqi constitutional law professor Ayat Al-mudhafer) met with the delegation as part of a U.S. Department of State-funded civics program coordinated by WorldBoston, a local non-profit organization. Learn more.

Massachusetts: How Newsrooms Respond to Executive Session Secrecy | Jill Harmacinski at the Eagle-Tribune in North Andover describes how her newsroom responds to executive session secrecy and shares helpful tips for fellow reporters. These secret meetings are allowed only under certain circumstances and are the focus of NEFAC’s latest round of freedom of information law lessons. View previous open meeting and public record law lessons in our FOI Guide.

NEFAI 2022 | NEFAC hosts each year a multi-day investigative journalism training program called the New England First Amendment Institute. Journalists from a variety of media and all six New England states gathered at Northeastern University in October for the 12th annual program. They learn from dozens of elite reporters, editors and attorneys — all at no cost to them. Learn more about this year’s Institute and the journalists selected to attend.

Police Misconduct Records | With renewed scrutiny of law enforcement agencies across the country, NEFAC is updating its FOI Guide to include legal primers on police misconduct records. Reports for Maine and Vermont are now available. We discuss how state public record laws address these documents and under what circumstances you can obtain them. Learn more about public record laws and watch video tutorials on a variety of open government issues.

First Amendment and the Free Press | NEFAC’s Justin Silverman recently visited the University of Massachusetts Amherst as part of the coalition’s featured speaker program. NEFAC visits classrooms, campuses and community centers to discuss the democratic role journalism plays in our country and how newsrooms can better meet their obligations to the communities they cover. Learn more about the program and how to reserve a guest speaker.

NEFAC, Media Groups Argue Against Subpoena Requiring Boston Globe Reporter Testimony | “Compelling reporters to testify about their communications with sources — even on-the-record, nonconfidential conversations — harms the newsgathering and reporting process, to the ultimate detriment of the public,” explained the groups in a case involving a Harvard admissions scandal. Federal prosecutors subpoenaed a Boston Globe reporter to testify.

Massachusetts Public Records Law Criticized for Lack of Transparency | NEFAC Executive Director Justin Silverman speaks to Mary Wilson at Western Mass. News about exemptions to the state’s public records law. “What we’re seeing is that these exemptions can be overused,” Silverman said. “They can be misapplied, they can be abused, they can be used as a way to shield the public’s view of what’s going on in government.”

NEFAC to Teach First Amendment, FOI Law to Iraqi Diplomats | “Part of NEFAC’s mission is to expand the public’s understanding of the First Amendment not just in our region, but throughout the world,” said Justin Silverman, the coalition’s executive director. “This program allows us to reach citizens of other countries and teach them the value of First Amendment freedoms and the public’s right to know about government.”

NEFAC Fights for Police Misconduct Records in New Hampshire, Submits Amicus Brief in Right-to-Know Law Case | “Transparency and accountability lead to trust between the citizenry and the government,” wrote NEFAC and the Union Leader Corp. in an amicus brief filed in ACLU of New Hampshire v. N.H. Dept. of Safety, Div. Of State Police. “The need for such trust is critical when the governmental actors are authorized to effectuate arrests and to use force when necessary.”

Vermont: How Newsrooms Respond to Executive Session Secrecy | Sasha Goldstein at Seven Days describes how his newsroom responded to the Burlington City Council after it called an illegal executive session meeting. These secret meetings are allowed only under certain circumstances and are the focus of NEFAC’s latest round of freedom of information law lessons. View previous open meeting and public record law lessons in our FOI Guide.

NEFAC to N.H. Supreme Court: First Amendment Protects Right to Criticize Others on Matters of Public Concern | Using state defamation law to punish protected expression, explained NEFAC and fellow amici, “would not only chill robust debate on matters of public concern, but also would potentially cause media outlets, out of a fear of vexatious litigation, to self-censor the vital fora that they create for members of the public to debate important issues of the day.”

New Hampshire: How Newsrooms Respond to Executive Session Secrecy | Jonathan Van Fleet at the Concord Monitor shares how a government agency inappropriately held executive sessions, secret meetings that are allowed only under certain circumstances. Van Fleet discusses how he and his newsroom responded to these meetings and continued reporting despite the secrecy. View previous open meeting and public record law lessons on our YouTube channel.

NEFAC Joins Call for Release of Documents Detailing Flight of Migrants to Martha’s Vineyard | “There are undoubtedly records related to this flight — from planning to execution to post-flight communications,” explained NEFAC, the Radio Television Digital News Association and the Reporters Committee for Freedom of the Press in a letter drafted by the First Amendment Foundation. “Many of the requested records should be readily available and easily accessible.”